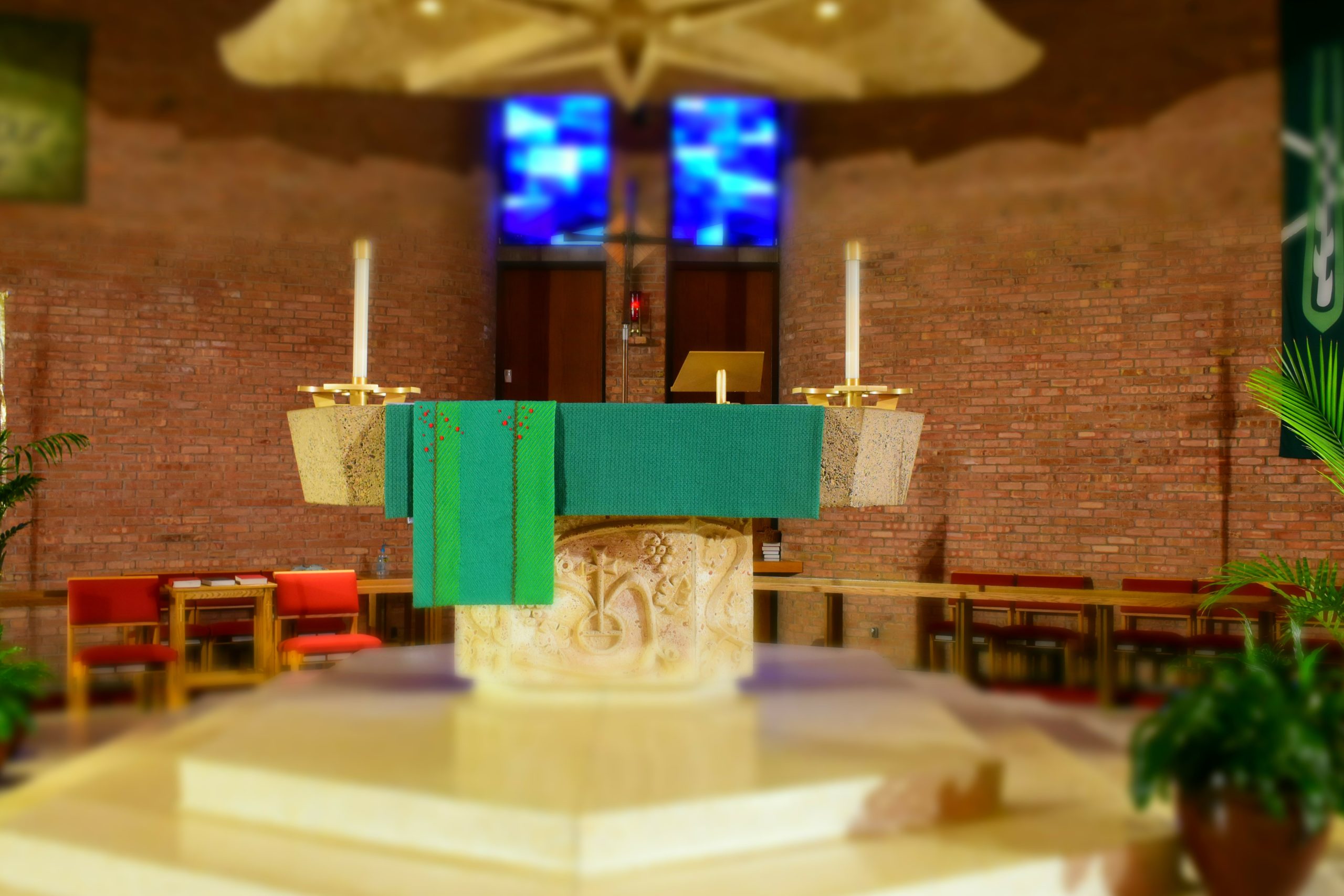 Placed at the center of the building, the Sanctuary reminds us that God is in our midst and that worship and teaching are at the center of Christian life. Worshipers are seated in a semi-circular manner, almost as if they were surrounding the altar and pulpit.  Pews extend only 15 rows back, bringing a feeling of closeness in worship.  Members of the congregation are gathered together as members of God’s family, the community of believers.

The Sanctuary of St. Philip’s is filled with symbols of our Christian faith. The general theme suggests that we are gathered in this place to be fed, for God has come to earth to spiritually and physically feed all people. 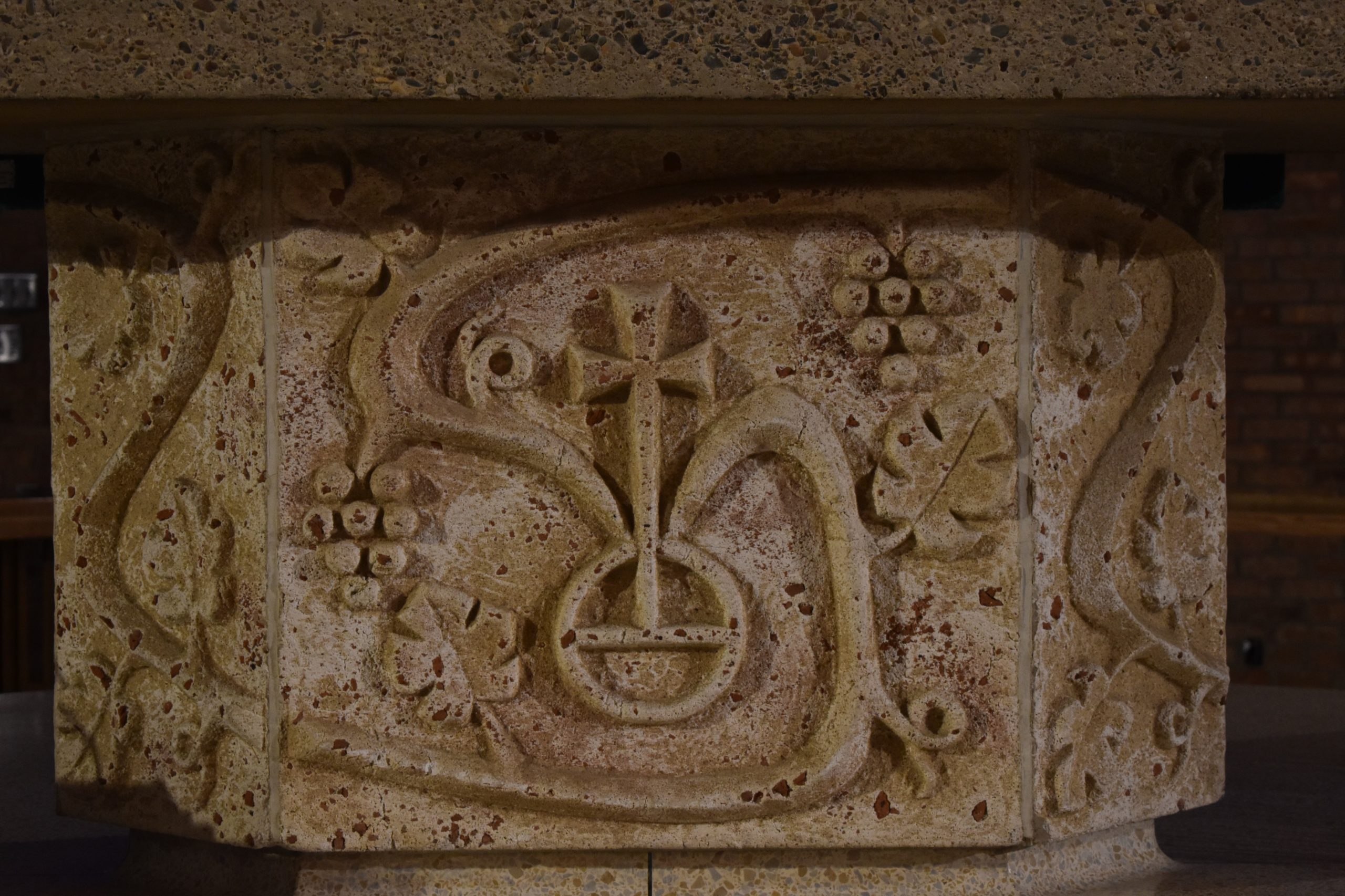 The vine and branches growing out of the Cross signify what Christ told us, “I am the vine and you are the branches.”  Christ is the very source of our existence.  We receive life from him and his victory over sin, which the Cross and orb symbolize.  The branch continues without end around the base of the altar, suggesting that the grace of God is everlasting.

Suspended over the altar is a modified Celtic Cross called a Baldachin.

The baldachin measures 56 x 32 feet and weighs approximately 8 tons. It is made of steel, wood, Styrofoam, and plaster sand-cast. Palmer Eide of Sioux Falls, South Dakota, was commissioned to create this structure. 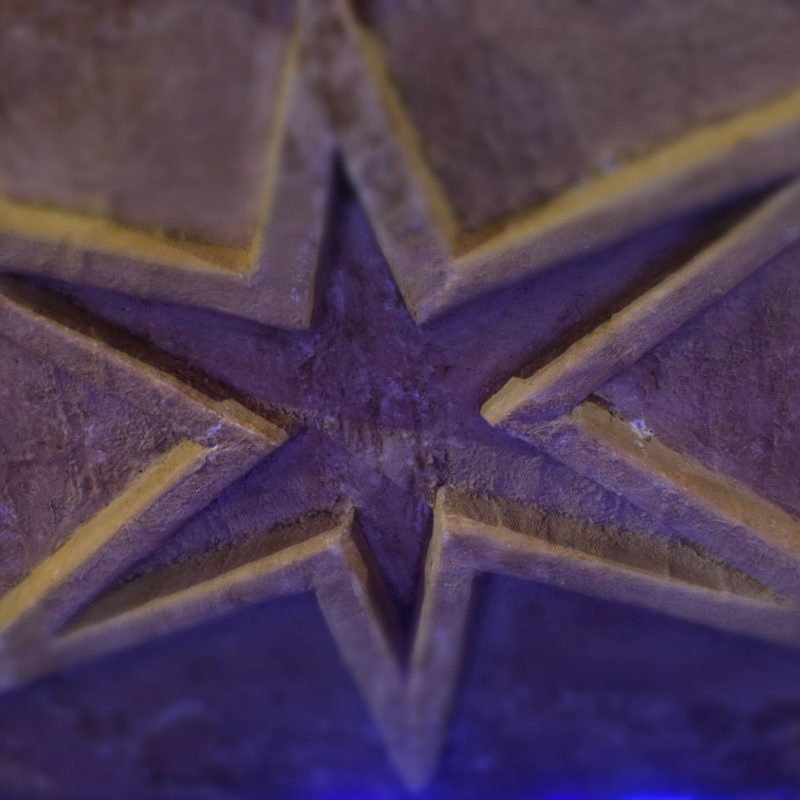 The six-pointed star under the sun symbolizes the six days of creation when God created the world and all living creatures. 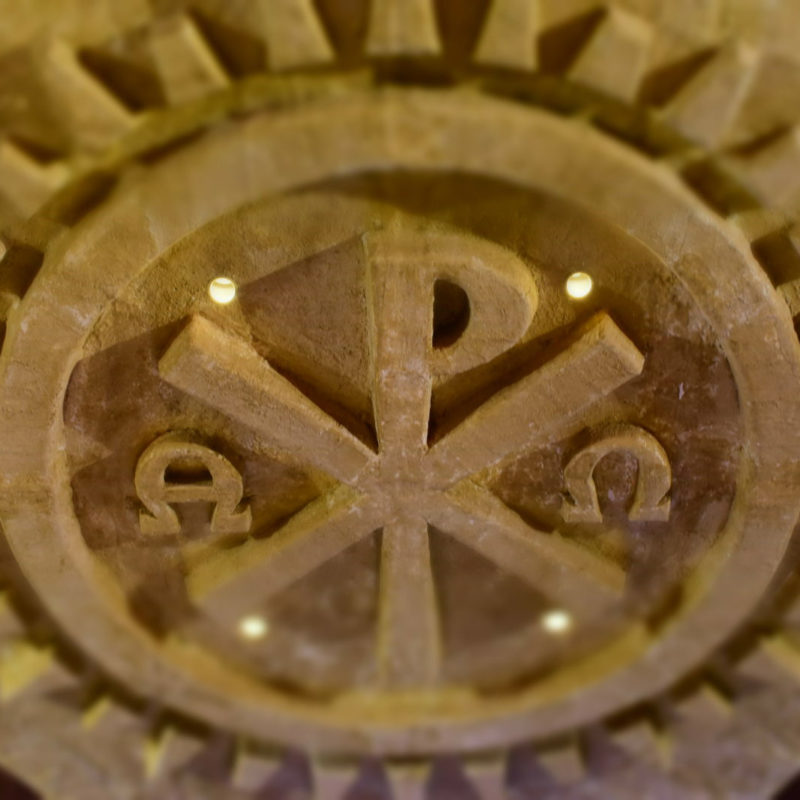 At the center enclosed in a bursting sun is the Chi Rho, the first two letters of the Greek word for Christ, plus the Alpha and Omega, the first and last letters of the Greek alphabet – symbolizing Christ as the beginning and the end. This tells us that because of God’s endless love and mercy, Christ was sent to earth for all people. 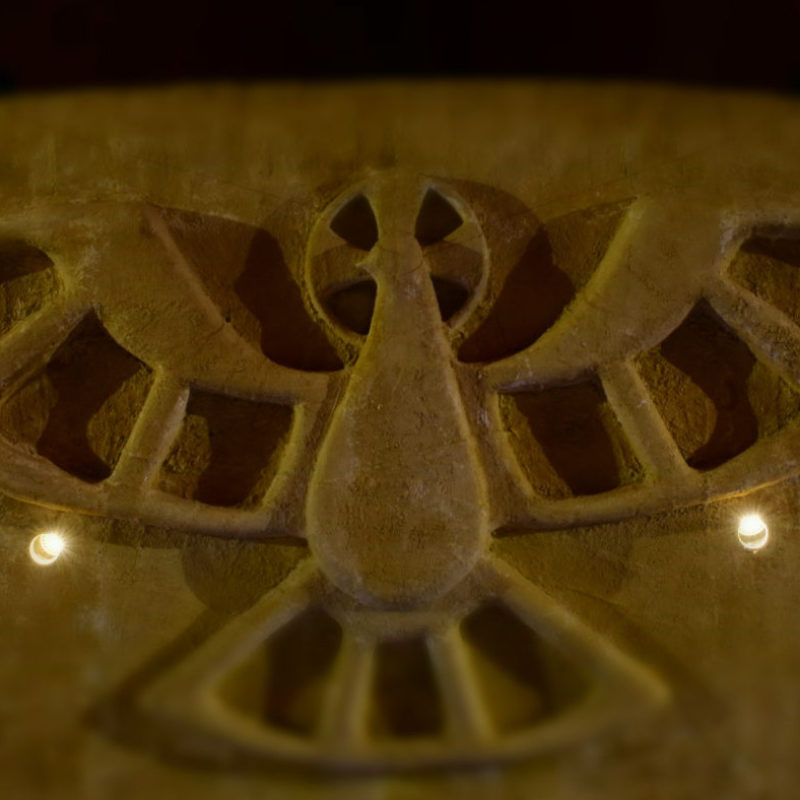 God in Christ still strengthens and sustains us today in the form of the Holy Spirit, which is represented by the dove over the sun. 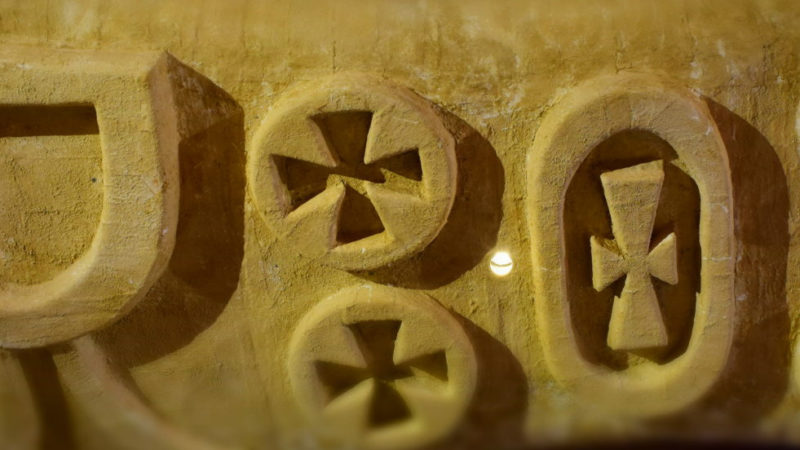 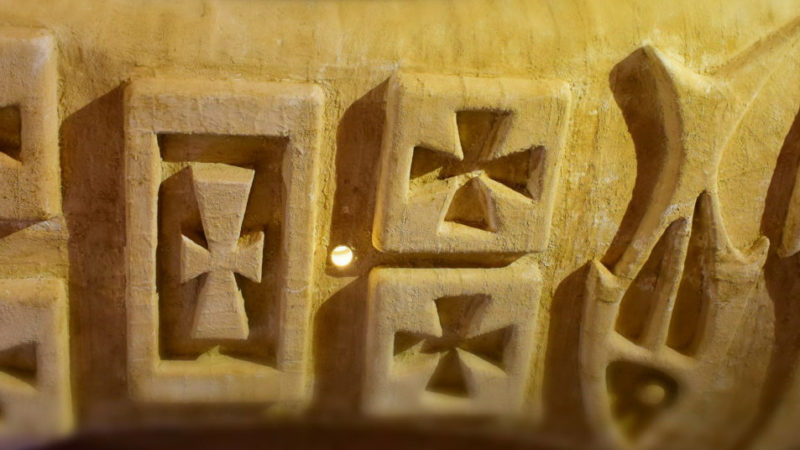 The five loaves and two fish, based on the miracle of the feeding of the five thousand recorded in the sixth chapter of John’s Gospel, remind us that our daily bread – all that we need to live on this earth – is given to us by God. 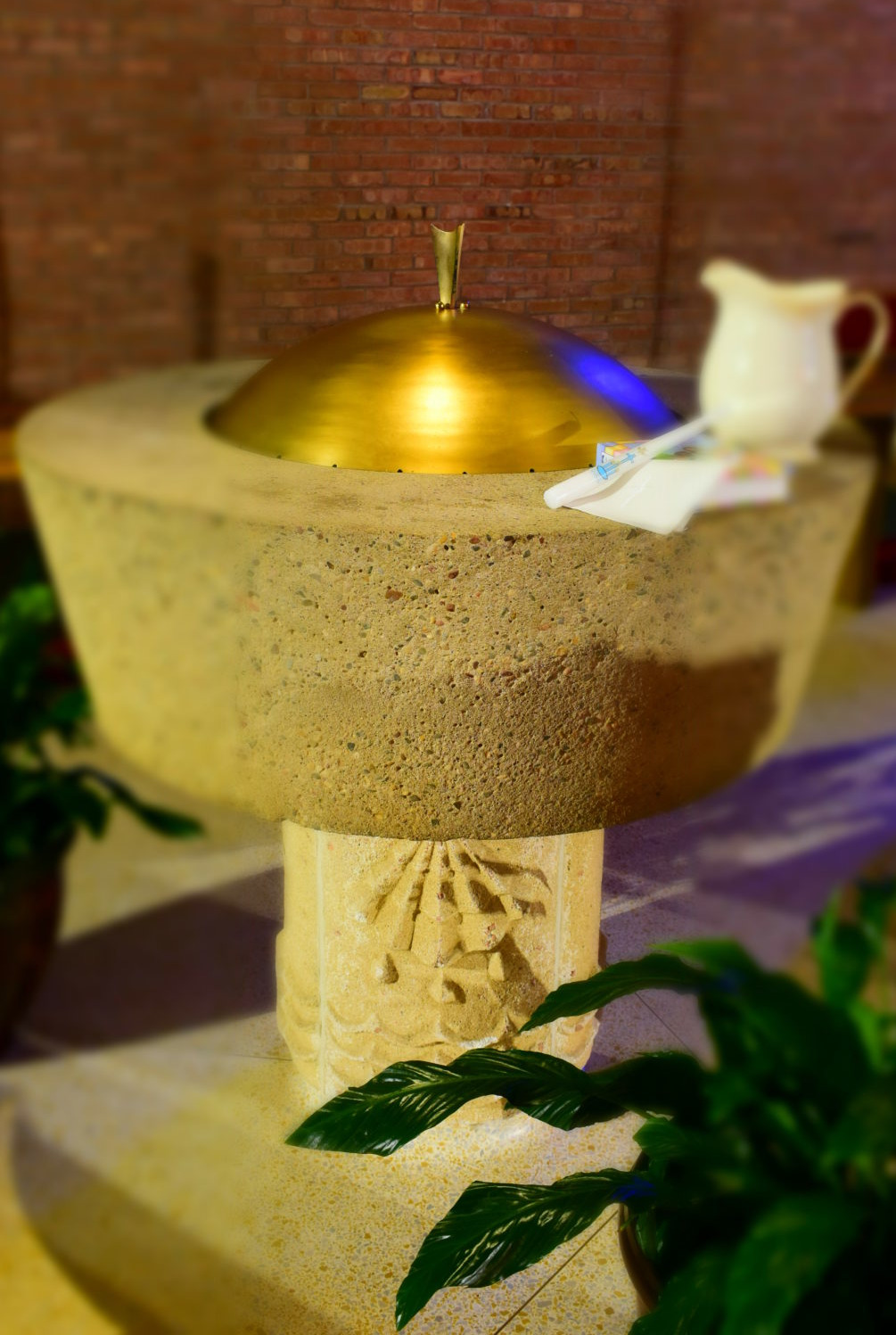 The shell and the drops of water represent Holy Baptism, by which we are made members of God’s family of believers and are given eternal life.  The three drops of water remind us that we are baptized in the Name of the Father, Son, and Holy Spirit.

During the service of Holy Baptism, the person being baptized is presented with a lighted candle.
“Let your light so shine before others that they may see your good works and glorify your Father in heaven.” 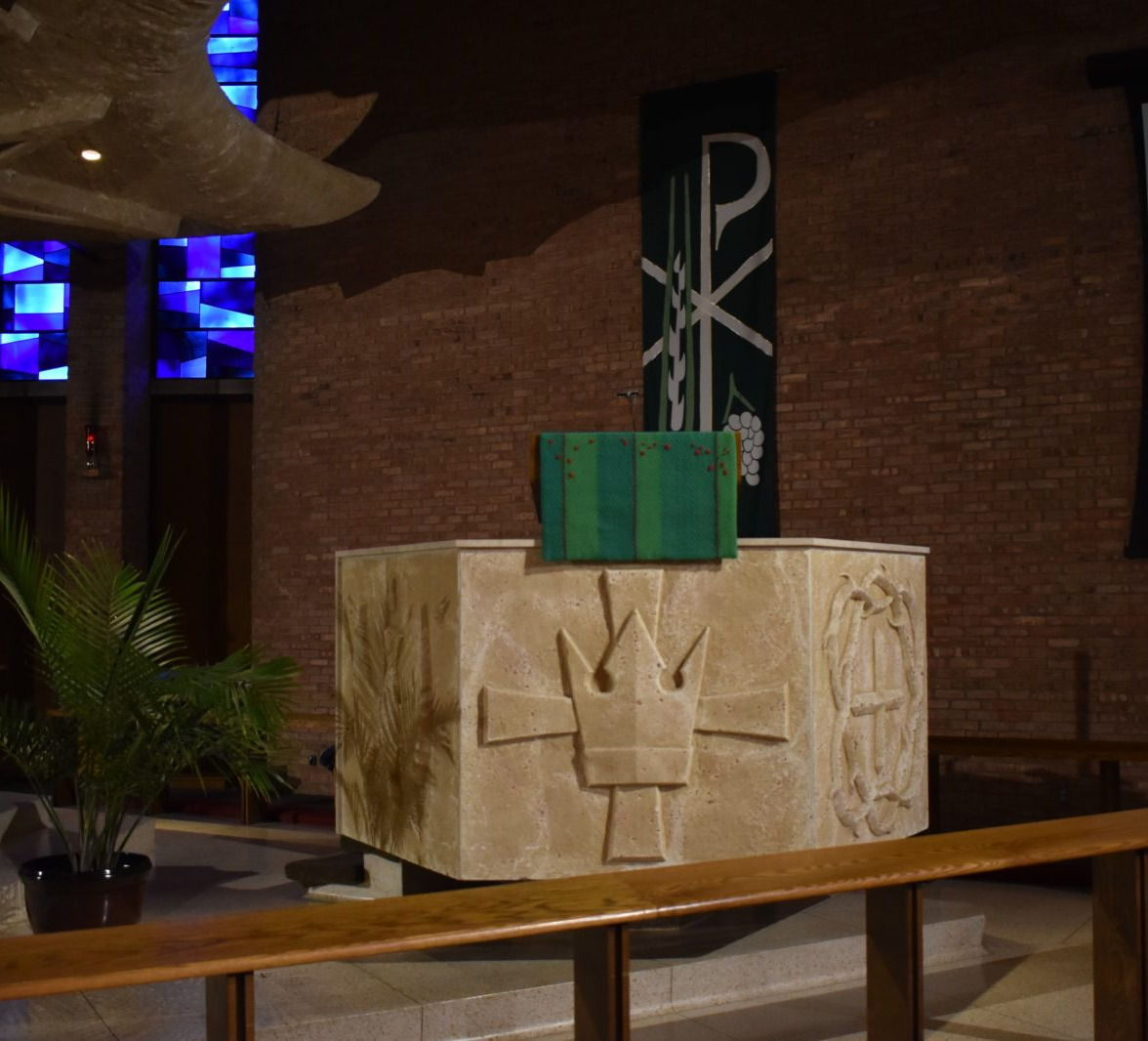 The panels surrounding the pulpit include symbols for the five seasons of the church year in which God comes to us. 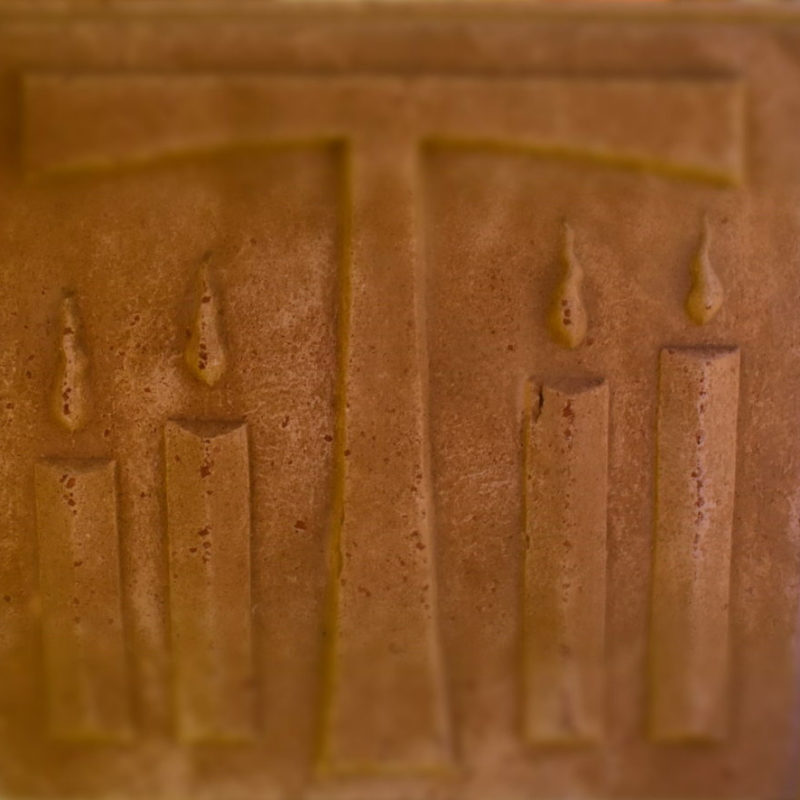 Advent:  Here the Church anticipates the coming of Christ, whose coming has meaning only within the context of the Cross. The four candles represent the four weeks of Advent. 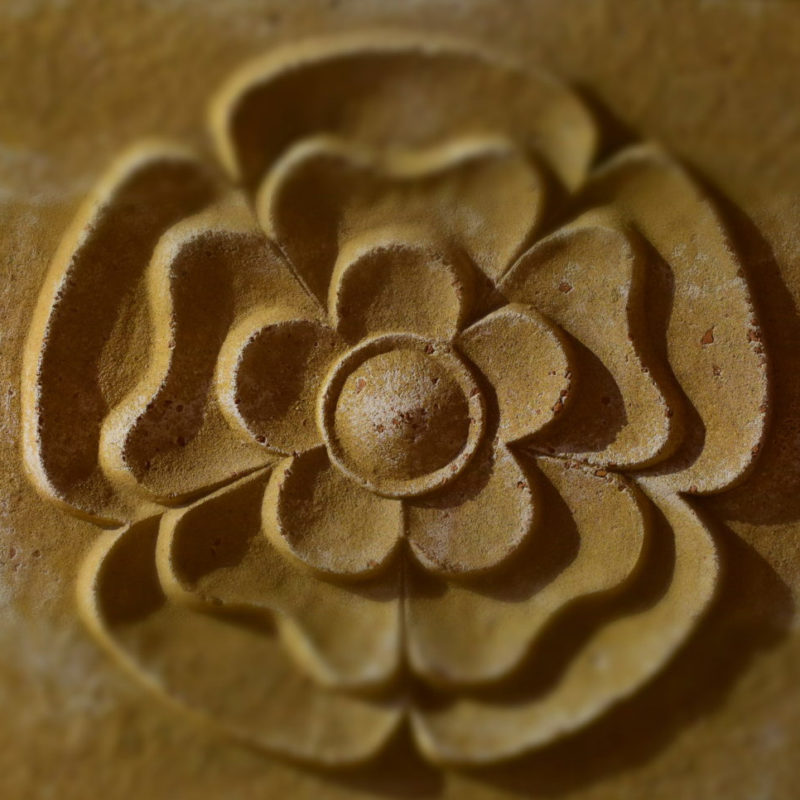 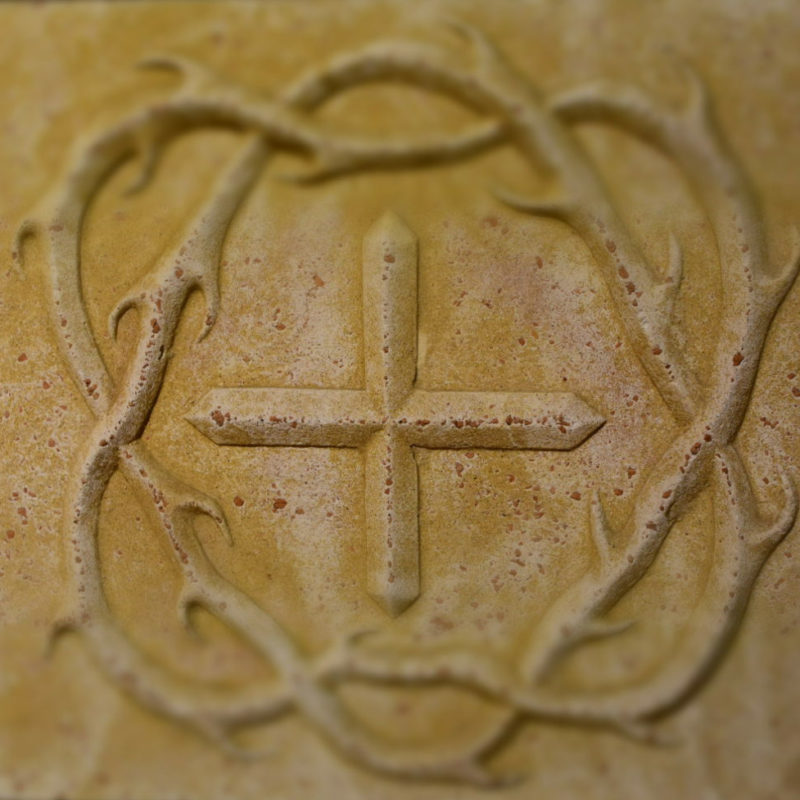 Lent:  The cross and thorns remind us that God became human in Christ only to suffer and die for the sin of the world. 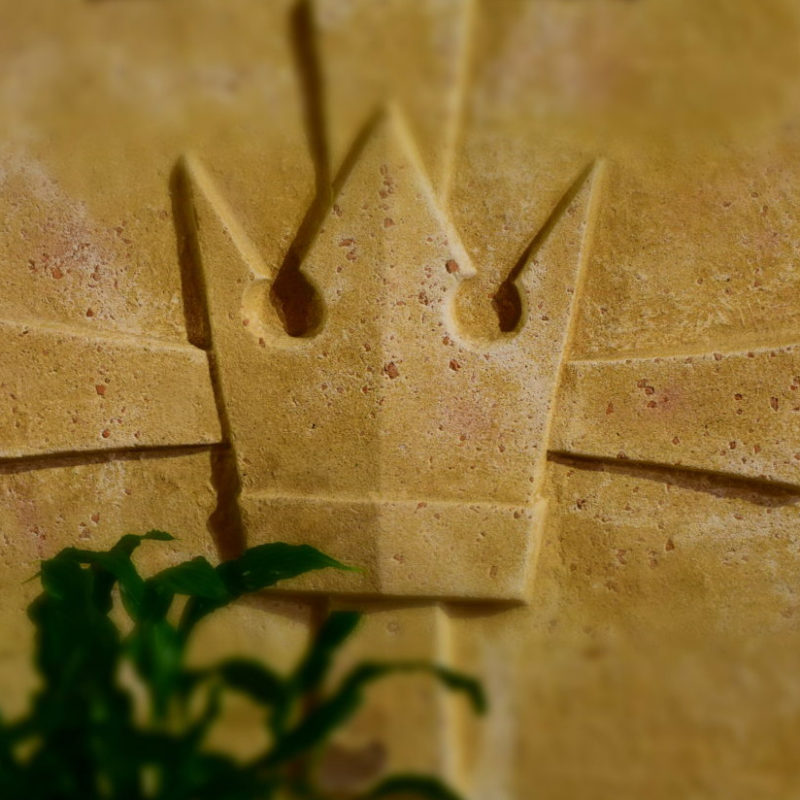 Easter:  The crown reveals Christ as King of the world because of his glorious victory over the death he suffered on the Cross. 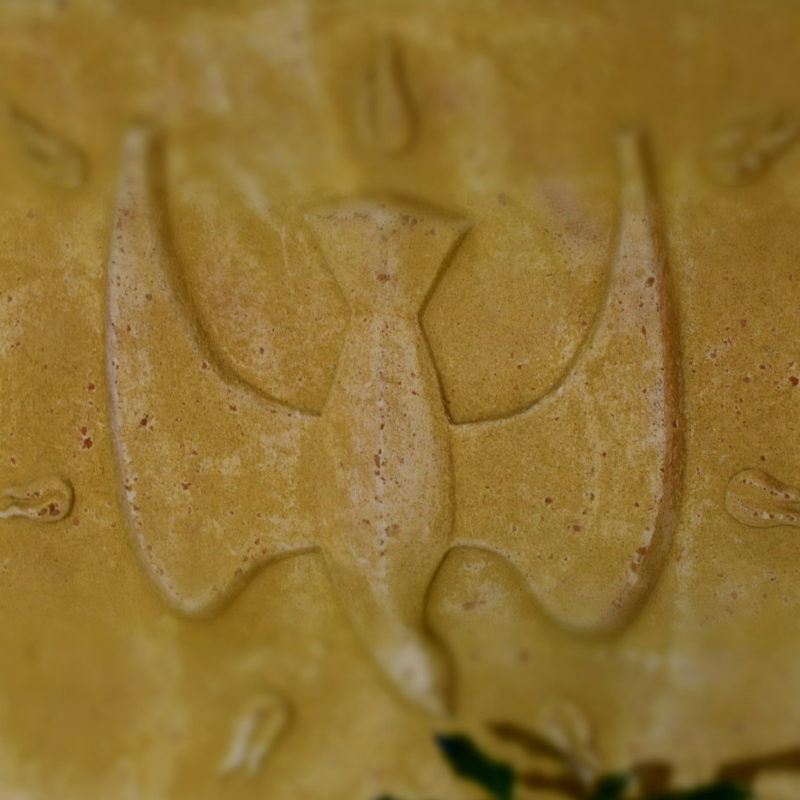 Pentecost:  Christ left his Holy Spirit to dwell among his people on earth at Pentecost, the birthday of the Church. The Dove symbolizes the Holy Spirit, God coming to earth to sustain his people. 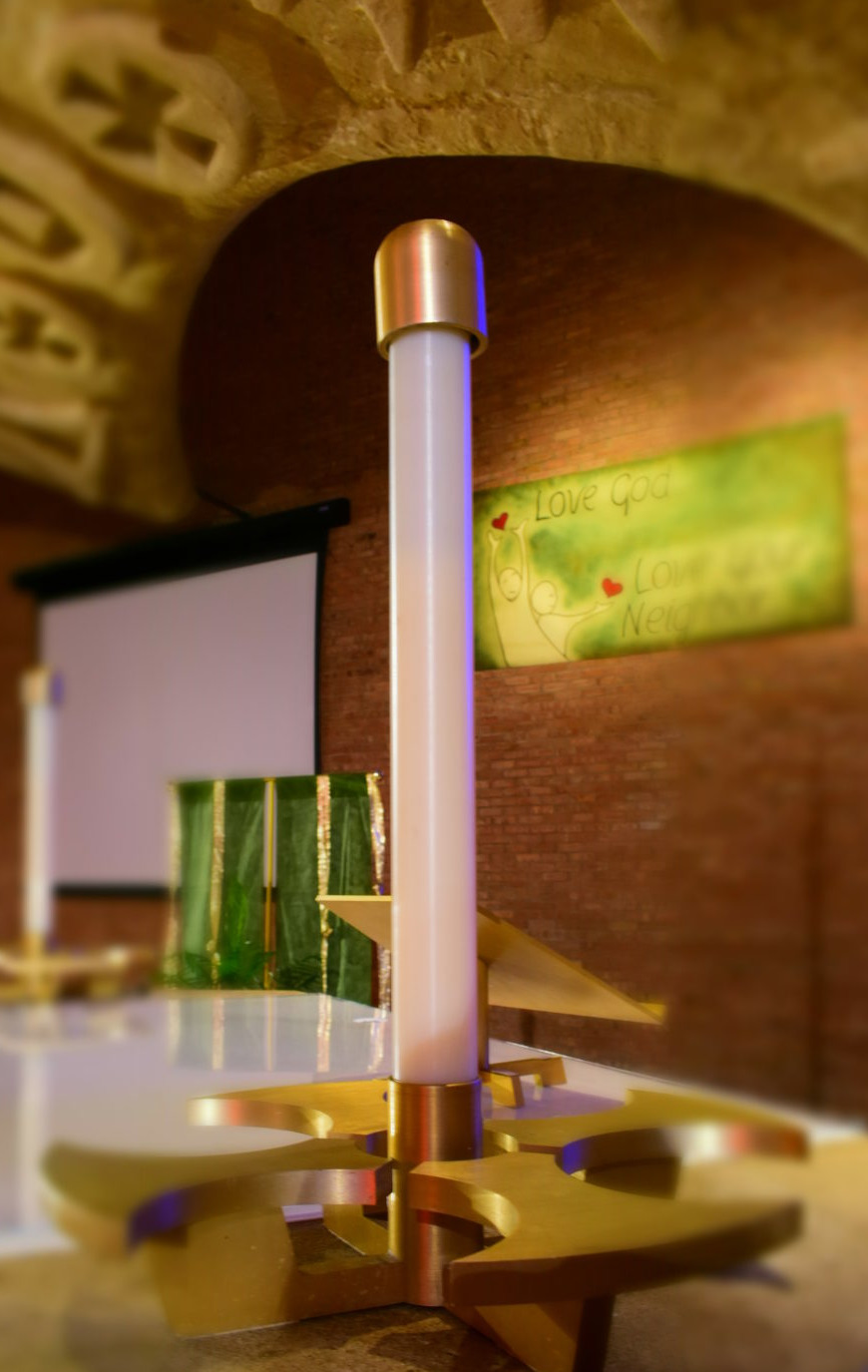 Light is the symbol of joy. Candles are symbols that represent the light of God and specifically, the light of Christ. The altar candle is often placed on the altar, usually in pairs. The use of two candles on the altar points out that Jesus was both human and God. Candles symbolize the light of Jesus Christ going out into the world where believers are to serve. 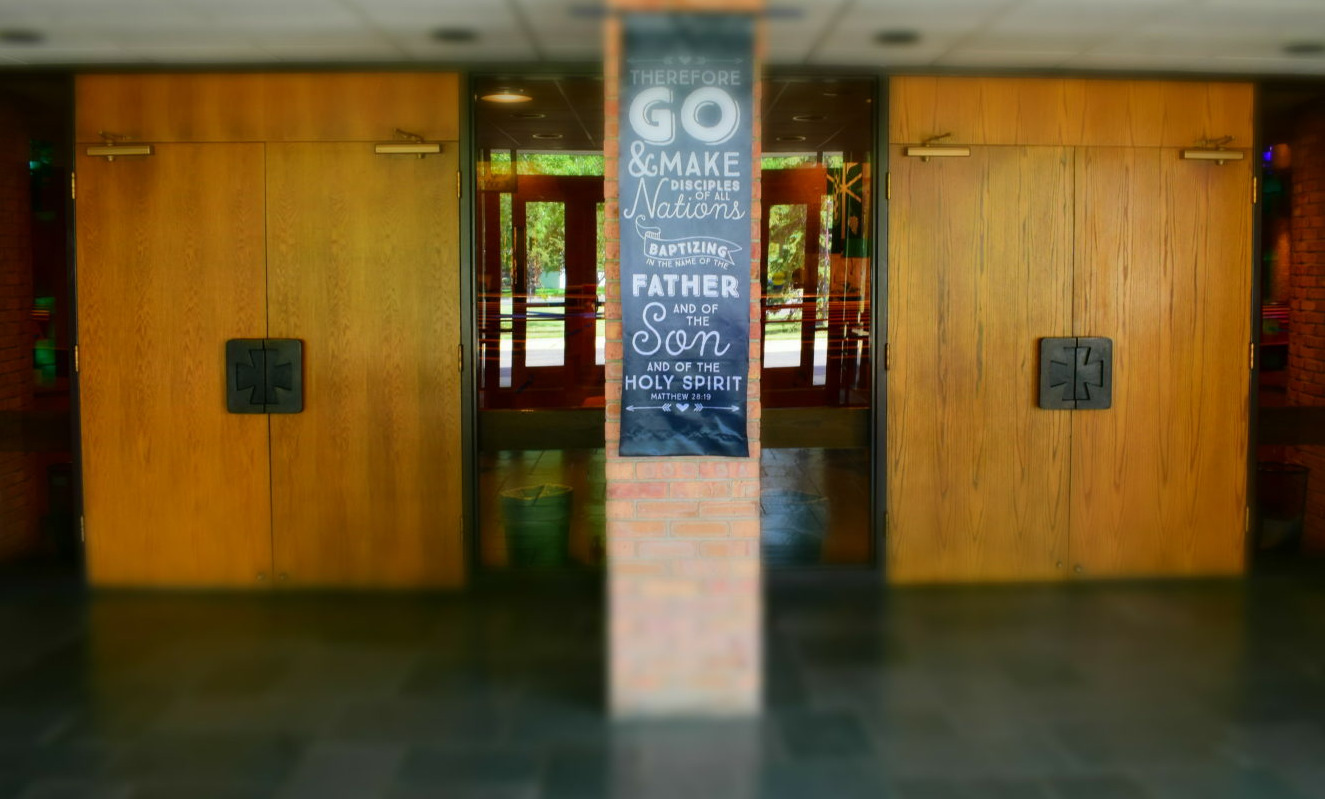 The many doors leading into the Sanctuary and the open chancel with the open communion rail remind us that as members of the priesthood of believers we have direct access to God’s grace through the Word and Sacraments.  Having received God’s grace, however, we cannot keep it within us. The many doors also suggest that, now fed and strengthened, we are to go forth into the community and feed the world with the wondrous news of God’s everlasting grace in Christ Jesus.