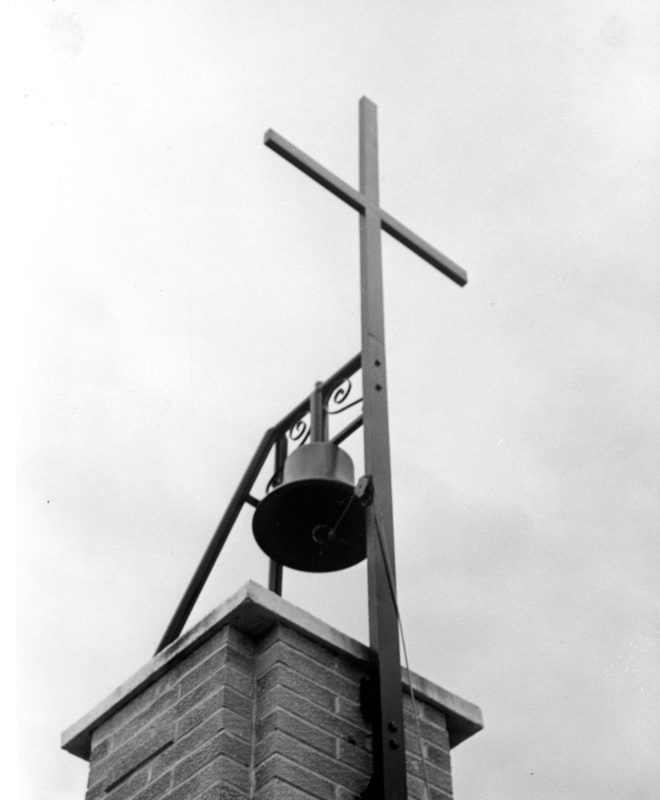 In the summer of 1958, Elmer Johnson, a long-time employee of the Northern Pacific Railroad, convinced his employer to donate a bell to St. Philip’s Lutheran Church.  As the railroad was nearing the end of the steam locomotive era, it donated a bell from one of its retired steam locomotives.

The bell is made of brass and weighs about 650 pounds.  It was prepared for use as our church bell in the Brainerd locomotive shop and then shipped to Fridley.  It was mounted in the tower of the new church building, located near what is now the restrooms outside of the current Chapel, the original Sanctuary.

When the 1965 new building program was underway, the bell was taken down from the tower and placed in storage at the church.  Since no bell tower was provided in the new building, the bell languished in storage in a far corner of the fan room for many years, used rarely on special occasions.

About 1978 it was decided to put the bell in the rear of the new Sanctuary, far up in the rear of the choir loft in between the two sections of pipes of the new organ.  A bracket was manufactured that was strong enough to support the weight of the bell.  The bracket was affixed to the brick pillar in the organ/instrument loft where it hangs yet today. The bracket is an “L”-shape of thick strap iron type material.  An angle piece helps support the outside end of the bracket for the weight of the bell.  The bell is supported by means of a one inch threaded rod through a hole at the outside end of the bracket.

The goal was to use the bell on Easter Sunday of that year, celebrating the Resurrection, not only of Christ, but also of the bell.  On Saturday prior to Easter Day, after choir rehearsal, several of the sturdier men of the choir carried the bell to the instrument loft.  With some difficulty the bell was wrestled into place and secured to the bracket.  The bell was tested and rang loud and clear.  It was to be a joyous occasion.

Easter Day arrived, and the bell was scheduled to ring at the announcement of the Resurrection.  The only “fly in the ointment” was that overnight the sheer weight of the bell had caused the outside end of the bracket to sag down slightly.  The lower edge of the bell had come to rest against the back of the bracket without anyone noticing.  At the appointed time in the opening of the service and on the very first pull on the rope to ring the bell, instead of a joyous peal, there was a dull “clank.”  There was much consternation and some embarrassment as the entire choir (and many of the congregation) turned to see what happened. 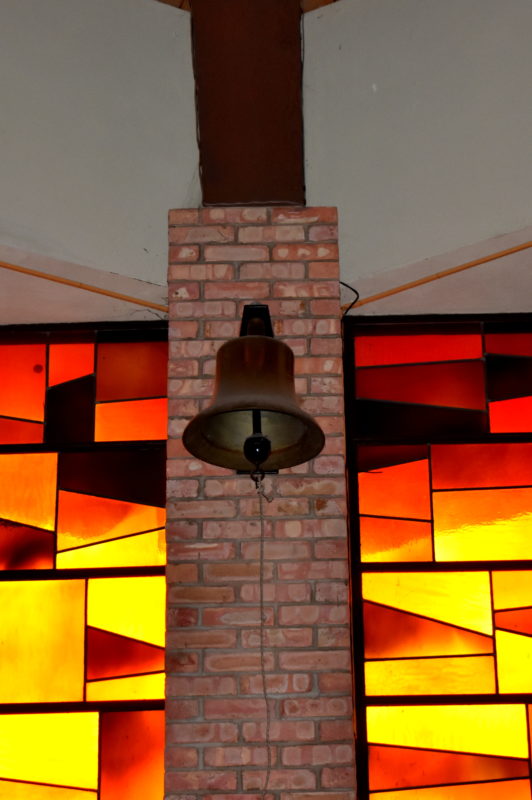 Shortly following the close of the first service, urgent repairs and adjustments were implemented that allowed the bell to hang free of the bracket.  It rang joyously at the second service and still does so to this day.

I can attest to the embarrassment and many chuckles from the choir, and to all that transpired in the re-mounting and use of the bell.  I was involved in all of it and I was the one pulling the rope to ring the bell.