Luke 3:22 “…and the Holy Spirit descended upon him in the bodily form like a dove.” 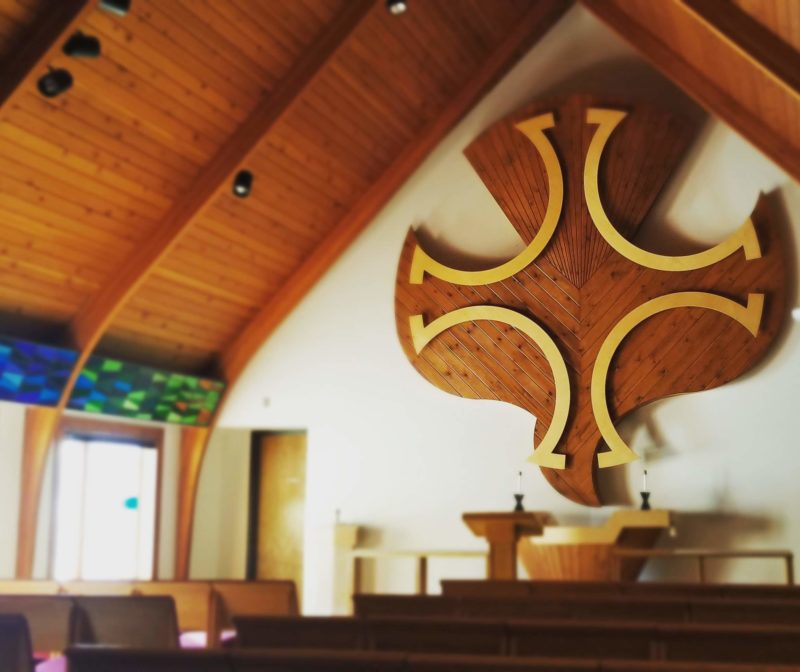 The architect and the building committee were unsure of how to finish the front wall of the room.  This wall was designed with floor-to-ceiling sheet metal studs set at a slight angle on either side to form a wedge.  I happened to be part of a conversation about what to do with the wall.  Hearing the lack of clarity as to how to design the wall for the Chapel and the contractor’s concern about completing the area, I suggested that the studs be overlaid with ¾” plywood, then the sheet rock.  This would provide a structure to the wall on which most anything could be attached.  That way any design could more easily be implemented in the future.  That idea was implemented, and the contractor was able to complete the contract.

For the next year or so the room was used primarily as a “utility” meeting room for a wide variety of occasions.

About that time a committee was formed in part to make recommendations as to the artistic use of the building and the use of some items of art.  The Art & Interior Design Committee consisted of Bob Becker, Lorraine Ordemann, Ralph Petersen and Marilyn Hole. As there was a desire to have a “Chapel”, as was the original intent, discussions followed in the committee as to how to decorate the room designated as a Chapel.  Adorning the front wall was the focus of the discussion. Several designs were considered. All of them were to be a bold statement that would make the room a Chapel at first glance.  The committee agreed that the form of the dove was the choice and plans then moved into action.

Because the room had been used as a general-purpose room for some length of time, there was resistance to define the room as a Chapel.  The sense of the building committee as well as the Art & Interior Design Committee were to designate the room as a Chapel first, and as a multi-use room secondarily.  To affirm this choice the dove design was drawn to scale on the front wall so that all could appreciate the scale of the design.  Final approval followed soon thereafter and work on building the design moved forward again.

In the summer of 1994 the room was cleared, heating vents were covered, and I moved my woodworking shop into the room to begin work on the dove.  The budget for the dove was $750. Lumber was ordered, and work began.

I must say that even though the design was essentially mine and that I had drawn all the designs, I had little idea as to how exactly all this was to be done.  It became a journey in faith.  I knew how to begin, that is, to draw the final dimensions on the wall and begin the necessary calculations.  I am very thankful for Casio’s scientific calculator, as I used many of the functions at each juncture of the process.

The front wall has a “fold” in the center, each “leaf” is 8 1/2 degrees off a direct line across the room.  Each side face of the dove is 4 degrees off the horizontal line of the wall.  It was then necessary to calculate the size of each of the ribs that are used to mount the face of the dove.  Many calculations were accomplished with much trial and error.

Work progressed in stages.  Each stage was planned so that there was time to complete a stage in one work time.  Weekends and evenings and holidays, as well as “days off”, were dedicated to the construction.  At the close of each work session I was not sure as to how the next step would be accomplished.  Amazingly, in the interval of time to the next work session, the answer became apparent.  The entire construction proceeded like that.  It was a journey of faith.

The construction required homemade jigs and appliances in order to cut curves, taper boards where required and so on. Scaffold became available for use and was on site until the end of the project. Many volunteers came to help.

There were many considerations in the total “look” of the Chapel.  The front wall was to have the dove, a raised platform on the floor, a “communion rail” that reflected the style in the main Sanctuary and was removable, an altar, mounting the original cross on the back wall in the same fashion as it had been on the original front wall, as well as lighting that would highlight each element in the room.  Stained glass panels constructed by willing volunteers flanked both sides of the Chapel.  Bay windows, also with stained glass, replaced the original windows along one side.

The altar was built in my workshop the following year.  Its design and construction were very difficult because of its design.  Again, I was guided to find solutions to the geometry of the design.

There are three separate ellipses involved.  The top is one, the depressed portion of the top is a second and the base is the third.  The tapered staves around the middle were made in sets of four.  By “accident” the width of the top and bottom are each diminished by 10% at each quarter of the circumference.  This required calculating the circumference of each ellipse, then dividing by four, then, by trial and error, estimating the width of the first stave and recalculating until the dimensions fit the quarter circumference.  Total construction took about four weeks working part time.

The altar was completed and delivered in time for Marilyn Hole to hold her wedding ceremony in the Chapel.

Many willing and talented volunteers were part of this creation.  I am very grateful to have been a part of the process.  I consider it as one of my finest woodworking projects.